On 14 and 15 July some 35 experts from Europe and the United States met in Santa Colomba near Siena to discuss the causes of the Eurozone crisis, to find ways to solve it and to reform the institutions of the European Union. The conference was organised by the Luxembourg Institute for European and International Studies and Professor Robert Mundell.

Participants identified different roots to the crisis. Whereas some saw the excessive debts of member states and the non-compliance with the Maastricht criteria as the main causes of the Eurozone crisis, others identified imbalances in external trade and diverging inflation rates among the member states as the core of the crisis. Most participants agreed that the Maastricht Treaty failed to provide the means to guarantee the functioning of the Eurozone. It has indeed been argued that the Maastricht Treaty is the result of political bargaining, and that it lacks the most important elements to allow the Monetary Union to function smoothly. 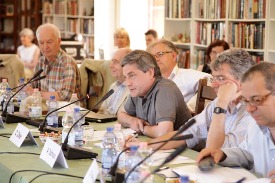 Furthermore, the hitherto crisis management was seen as insufficient. There was mutual consent that there is also a general crisis of trust. The perceived lack of legitimacy of EU institutions is making the way out of the crisis even more difficult. Several participants argued in favour of a transfer of more competencies to the European level as suggested by the German Minister of Finance Wolfgang Schäuble. Others relied on the report by Herman van Rompuy, Jean-Claude Juncker, José Manuel Barroso and Mario Draghi who want to strengthen legitimacy and accountability in the Eurozone. Participants agreed that the future of the European Union depends on resolving the Eurozone crisis, a meddling through is no more an option.